I am deeply passionate about the written word, in all its wild and wonderful forms. I’m currently the Director of Publishing & Comics Outreach at Kickstarter, and I’ve long spent my time as a writer, editor, publishing and crowdfunding consultant, and cultural hipstorian [sic] in Brooklyn, NY.

I’ve worked in and around the media for more than a decade. Prior to this role, I was Kickstarter’s Senior Journalism Outreach Lead (check out my top tips!), Creative Content Director for Per La Mente, Director of Matchmaking at Gotham Ghostwriters, Editor-at-Large for Hyperallergic, Copyeditor at MTV News, Associate Editor at Random House, and a store manager at New York’s famed Strand Bookstore. I’ve also served as a freelance editor for more than 100 publishers and websites, as well as offering a broad array of editorial services to individuals.

My writing focuses on strange art and unusual culture, as well as the inner workings and bizarre beauty of New York City; I’ve written for a range of outlets, including Vice, Gothamist, Atlas Obscura, Artsy, New York Post, Hyperallergic, Slate, and many more. My first book came out in 2015: Brooklyn Spaces: 50 Hubs of Culture & Creativity (Monacelli Press), based on my decade-long cultural-history project Brooklyn Spaces, which chronicles DIY and the underground throughout the amazing borough I call home.

A few more fun bookish facts about me: I co-founded an all-girl graphic-novel book club called Jugs & Capes, I’m one of the all-time top-100 reviewers on Goodreads (a site with 30 million members!), and I moonlight as Agent Brooklina for the book-spying site CoverSpy. 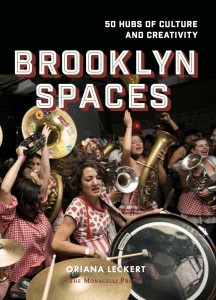